This Far In by Carl Phillips

Like any spell for bringing everyone you’ve ever loved back,
said the wind last night. What is it, about nighttime and fragment
seeming made for each other? It’s morning, now. The wind is just
wind again, saying nothing, of course. The bomb cyclone, as it’s
called when there’s a more powerful than usual mashup of warm
and cold air leading to “hurricane-force wind events” hasn’t
happened yet, but there’s an ominous bending and failing to rise
up that the bamboo keeps doing, that makes me think Sure,
anything could happen, but when isn’t that true? So many poems
waiting for flight, grounded variously until better weather or until
the latest glitch (in vision, technique, both) that caused the latest
disaster gets worked out, the way it can seem impossible, during
the intricate steps of dressage, that the horses ever do things like
trot into a barn or casually walk to any field’s other end—yet
they do, eventually. What’s difficult resolves. Disaster is almost
never tragedy. The snowbells (that appeared overnight? or am I
just now noticing them?) are only snowbells if I call them that.
I could as easily call them Don’t tell me the worst I’d expected
is true, or Lo, the queen’s bodice, borne unobtrusively aloft, or—
or I can say it’s spring again, with its first shy flowers, meaning
color, not bearing. Not mood. Hopkins thought flowers expressed
devotion the only way they could: they turn toward the sun. From
humans, he suggested, God expects more—no, is owed more,
because we have more to give. Leaving out God and science,
I suppose I get that, a version maybe of what Campion says: All
do not all things well—as in we do what we can. I had a house
near the sea, once, for example; now I live where there’s no sea
at all, in a house with a yard filled with trees, among them this
barren pear tree from which I long ago hung a set of wind chimes
designed to sound like a cross between a ship’s bells and the sort of
music tapped out by the rigging’s cable blocks as they hit their
masts unobstructed, sails down in a storm. If I close my eyes, it really
can seem I’m home again—the sea not far, the wind in the leaves
standing in for the waves getting rougher than forecast, Rough
the way once you liked it, I can almost hear the waves choiring
back at me like an accusation of what I don’t deny, nor am I
shamed of it, bring the boats to shore, friends, lay me down on
the shore. This far into the country, though, a boat’s pretty much
useless. Hence the pioneers with their teetered wagons that they
called prairie schooners out of sheer nostalgia, already missing
the sea. Is that nostalgia? Or is it more like what Xenophanes
says, how if cows could draw, the gods in their pictures would have
horns, the gods of birds would have feathers everywhere, each
would brandish, for stateliness, two wings for mastering a wind
strong enough to bring the stars down, as we used to say, before
to touch meant collision, back when sex was what mattered
most; seemed to. Now precision does—specifically, that precision
with which love, felt honestly, deploys itself as if it hadn’t
planned to. So that it feels like chance: chance as a boy with
a sash marked Fate across the promise that his chest is, or soon
will be, give it time, there’s time, still. The truth is, there aren’t
that many people I can say I have loved, not in any way that matters
or stands memorable, really, and of those few I’m not so certain
I’d bring any of them back. At best, they wouldn’t find me
anything close to who I was when I loved them, which is to say
I’d disappoint them all over again, just differently, so there’d at
least be that. What is happening, they used to ask me. Could you
rephrase the question, I’d sort of mumble back, in a way it was
like dancing, when both people know how to dance, what I
mean is there was grace to it, a real grace, despite the mumbling,
which is maybe why it took so long, for one of us to stop, if here
to stop doesn’t have to mean letting go; more like: I am grateful
for you, let neither of us wish for or do the other harm. Let sex—
for, though I meant what I said about it not mattering most now,
it still matters—let sex be governed by that same restraint from
any harm unasked for. It almost sounds like prayer sometimes,
he said, describing light on water. He said it like the sort of thing,
after sex, one simply says. Entering the body, pulling gently back
out of it—is that so little for a life to have come to? That, and
the more than a few names long since scattered like those leaves
across which the Sibyl’s prophecies are written clearly enough,
if only the leaves would stop moving, if I could read and know,
for once, what? what’s left for me, in terms of time, directions
of fortune, who I am? Who am I, the hero says to himself,
looking past his reflection on the lake’s surface down to where
the darker greens give way at last to darkness. A light wind stirs
the surface. The reflection trembles without breaking apart. As if
this late in the long apprenticeship, “When I Change My Life”
had stopped being a song anymore worth singing. I believe
and refuse to believe that, equally. Speak to me; speak into me,
the wind said, when I woke this morning, Let’s see what happens. 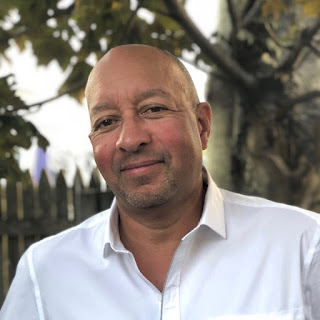