Some Things I Said by David Ferry

Some Things I Said

writings on the wall
*

I was the one who said where are you now?
*

I was the one who told about the one whose photograph in
the book of Eakins’s photographs was of
a guy the perfection of his body was his doom, and
Shakespeare said so too
*

Right there before my eyes was the one who said
where are you now? Where
are you Anne? I was the one
*

Who saw how Aeneas lay there in the darkness watching the
light, the little motions of light moving around the ceiling
and telling him something
*

I said good people are punished, like all the rest
*

I said the boats on the river are taking it easy
*

I said the brain in your head whispers
*

I said death lives in our words
*

I said how beautiful is the past, how few the implements,
and how carefully made
*

I was the one who said
her body witness is, so also is her voice
*

where rhymes with beware, I said
*

I said it is the body breathing,
the crib of knowing
*

I said the horse’s hooves know all about it, the sky’s statement of
oncoming darkness
*

The fumes on the roof are visible and drifting away like
martyred souls, I said
*

I said the knees of the committee touch each other under the
table, furtive in pleasure
*

I said
Eurydice, My Father
*

I said we huddle over the ice,
the two of us
*

I am the one who said,
I hum to myself myself in a humming dream
*

And how we’re caught, I said,
In language: in being, in feeling, in acting. I said, it’s
exacting
*

I said the sea upheld us, would not let us go nor drown us,
and we looked down say a million years, and there were the
fish
*

See, the dead bloom in the dark, I said
*

The nightjar feeds while flying softly, smiling, smiling, I said
*

I said revenant whitefaced Death is walking not knowing
whether
*

I said the formula on the blackboard said who are you
*

I said Utnapishtim said to Gilgamesh blink of an eye
*

The day doesn’t know what day it is, I said
*

What’s in the way the sun shines down, I said
*

I cried in my mute heart,
What is my name and nature 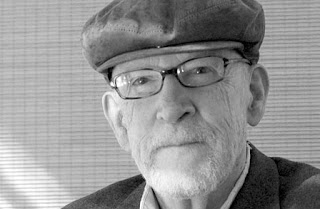