The Perch by Galway Kinnell

There is a fork in a branch

of an ancient, enormous maple,

one of a grove of such trees,

where I climb sometimes and sit and look out

over miles of valleys and low hills.

Today on skis I took a friend

to show her the trees. We set out

down the road, turned in at

the lane which a few weeks ago,

when the trees were almost empty

and the November snows had not yet come,

and yellow leaves, crossed the swamp,

the remains of the 1850s farmhouse

that had slid down into it by stages

in the thirties and forties, followed

and came to the trees. I climbed up

to the perch, and this time looked

not into the distance but at

the tree itself, its trunk

contorted by the terrible struggle

of that time when it had its hard time.

After the trauma it grows less solid.

It may be some such time now comes upon me.

It would have to do with the unaccomplished,

and with the attempted marriage

of solitude and happiness. Then a rifle

from across the valley, percussions

of the custom of male mastery

over the earth — the most graceful,

most alert of the animals

being chosen to die. I looked

to see if my friend had heard,

but she was stepping about on her skis,

studying the trees, smiling to herself,

her lips still filled, for all

we had drained them, with hundreds

and thousands of kisses. Just then

she looked up — the way, from low

to high, the god blesses — and the blue

of her eyes shone out of the black

and white of bark and snow, as lovers

who are walking on a freezing day

kiss, then shudder to discover

the heat waiting inside their mouths. 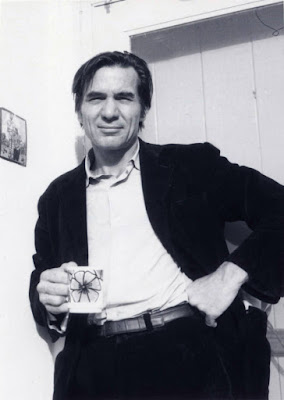