Chronic by D. A. Powell

were lifted over the valley, its steepling dustdevils
the redwinged blackbirds convened
vibrant arc their swift, their dive against the filmy, the finite air

the profession of absence, of being absented, a lifting skyward
then gone
the moment of flight: another resignation from the sweep of earth

jackrabbit, swallowtail, harlequin duck: believe in this refuge
vivid tips of oleander
white and red perimeters where no perimeter should be

here is another in my long list of asides:
why have I never had a clock that actually gained time?
that apparatus, which measures out the minutes, is our own image
forever losing

and so the delicate, unfixed condition of love, the treacherous body
the unsettling state of creation and how we have damaged—
isn’t one a suitable lens through which to see another:
filter the body, filter the mind, filter the resilient land

and by resilient I mean which holds
which tolerates the inconstant lover, the pitiful treatment
the experiment, the untried & untrue, the last stab at wellness

choose your own adventure: drug failure or organ failure
cataclysmic climate change
or something akin to what’s killing bees—colony collapse

more like us than we’d allow, this wondrous swatch of rough

why do I need to say the toads and moor and clouds—
in a spring of misunderstanding, I took the cricket’s sound

and delight I took in the sex of every season, the tumble on moss
the loud company of musicians, the shy young bookseller
anonymous voices that beckoned to ramble
to be picked from the crepuscule at the forest’s edge

until the nocturnal animals crept forth
their eyes like the lamps in store windows
forgotten, vaguely firing a desire for home

hence, the body’s burden, its resolute campaign:  trudge on

and if the war does not shake us from our quietude, nothing will

I carry the same baffled heart I have always carried
a bit more battered than before, a bit less joy
for I see the difficult charge of living in this declining sphere

by the open air, I swore out my list of pleasures:
sprig of lilac, scent of pine
the sparrows bathing in the drainage ditch, their song

the lusty thoughts in spring as the yellow violets bloom
and the cherry forms its first full buds
the tonic cords along the legs and arms of youth
and youth passing into maturity, ripening its flesh
growing softer, less unattainable, ruddy and spotted plum

daily, I mistake—there was a medication I forgot to take
there was a man who gave himself, decently, to me & I refused him

in a protracted stillness, I saw that heron I didn’t wish to disturb
was clearly a white sack caught in the redbud’s limbs

I did not comprehend desire as a deadly force until—
daylight, don’t leave me now, I haven’t done with you—
nor that, in this late hour, we still cannot make peace

if I, inconsequential being that I am, forsake all others
how many others correspondingly forsake this world

light, light: do not go
I sing you this song and I will sing another as well 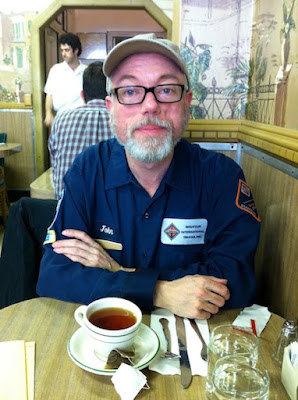