The holes burned in the night.
Holes you can look through and see
the stump of a leg, a bloody
bandage, flies on the gauze; a pulled-up

satellite image of a major
military target, a 3-D journey
into a landscape of hills and valleys . . .
All of it from real-world data.

a map being sketched on a scrap
of paper; a fist coming down firmly
on the table; a tray with a dish
of lamb, and a bowl of rice and pine nuts.

Yes, that's it. I've become
too clear-sighted—the mechanics of power
are too transparent. Yes, that's
precisely it. The creation

of a deep-down pit, a slag heap
of broken masonry, of twisted metal,
a persistent ringing noise from inside
as if thousands of telephones have been

left off the hook. Did you notice that?
The Pentagon's "Military Diaries
Project," soldiers starring in their own
war movies, training digital cameras

on themselves—a child is put
in a wheelbarrow after stepping on a mine.
Politics? Personified. His head
permanently cocked, he is attended

by a team of physicians
and an electronic-implant engineer.
He hopes he'll be able to confer
with the Shah of Iran in Cairo. "Dead?

The Shah? Really? No one's said a thing
to me about it," his response to the response
of a diplomatic press correspondent.
Poetry's not what's made impossible

by it—laughter is. Is it even
farce?—the translator, for example, who,
because of threats, is wearing a bulletproof
vest and a large pair of army goggles

for disguise, the sniper who slides
a condom over the muzzle of his gun
to keep the sand out. I try to get
the chronology straight . . . I look

out on the harbor, in the blue light.
I type into my machine. Perhaps
a glance at the newspaper. I listen
closely and I don't listen at all . . .

How complicated do you think the geopolitical
background behind all of this is? Brains
uprooted and warped, the logic's
schizophrenic. What's that again? A poem,

a speech, of lament, a threnody.
A poem of thoughts, of consequences.
Time flows, is flowing, forward and back.
I lift a spoon, my hand is trembling. How many

corpses are counted and for what reasons?
That's what was said. The captured are blinded
except one blinded in one eye only
will lead the others back. What? War

to process it, systems
to represent it, war of myth
and metaphor, of trope and assent,
war of hundreds of millions of televisions

assuring it, hundreds of billions
of dollars, a PK machine gun or two, a few
gunmen you can hire cheap, with their own
Kalashnikovs. Now . . . what now?

I want you to watch carefully
what I am saying now—are you
with me? An inch-long piece of steel,
part of the artillery shell's

casing, sliced through the right eye
into his brain, severely damaging
the optic nerve of his left eye,
spraying bone splinters

into the brain, making him quick to lose
his temper, so acutely sensitive to pain
the skin on his face hurts
when wind blows against it . . . 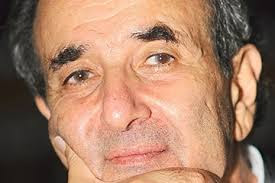 Posted by Anonymous at 8:43 AM