The money gone, I followed you
to the edge of love—only to find the city
sinking. Streets lit with dawn's blue
ashes. But it was the flecks of amber
slipping between the chimneys
that had us running. Dim alleys leading
to nowhere—or water. Then
the Piazza San Marco opening
the Mediterranean. That sudden
brightness. Pigeons crumbling
from the angels' rusted shoulders
in the hour before Venice vanished
beneath the crowd. Hour of birdsong
falling like pebbles on the promenade.
And the year's first widow chanting a new
god's name into the sea. Her body a stitch
in the shore. Brief inventor, make me
new again. For the heart fails not in its breaking
but the tightening. For the sun came on.
The plaza erupted in panels of blood.
And you were still my king. And I, still—
your king. 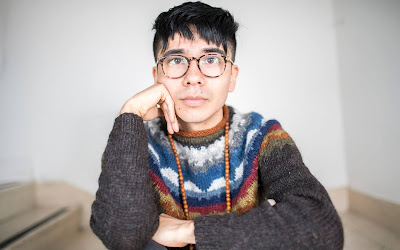 Posted by Anonymous at 9:21 PM