Waking in the Blue by Robert Lowell

Waking in the Blue

The night attendant, a B.U. sophomore,
rouses from the mare’s-nest of his drowsy head
propped on The Meaning of Meaning.
He catwalks down our corridor.
Azure day
makes my agonized blue window bleaker.
Crows maunder on the petrified fairway.
Absence! My heart grows tense
as though a harpoon were sparring for the kill.
(This is the house for the “mentally ill.”)

What use is my sense of humor?
I grin at Stanley, now sunk in his sixties,
once a Harvard all-American fullback,
(if such were possible!)
still hoarding the build of a boy in his twenties,
as he soaks, a ramrod
with a muscle of a seal
in his long tub,
vaguely urinous from the Victorian plumbing.
A kingly granite profile in a crimson gold-cap,
worn all day, all night,
he thinks only of his figure,
of slimming on sherbet and ginger ale—
more cut off from words than a seal.
This is the way day breaks in Bowditch Hall at McLean’s;
the hooded night lights bring out “Bobbie,"
Porcellian ‘29,
a replica of Louis XVI
without the wig—
redolent and roly-poly as a sperm whale,
as he swashbuckles about in his birthday suit
and horses at chairs.

In between the limits of day,
hours and hours go by under the crew haircuts
and slightly too little nonsensical bachelor twinkle
of the Roman Catholic attendants.
(There are no Mayflower
screwballs in the Catholic Church.)

After a hearty New England breakfast,
I weigh two hundred pounds
this morning.  Cock of the walk,
I strut in my turtle-necked French sailor’s jersey
before the metal shaving mirrors,
and see the shaky future grow familiar
in the pinched, indigenous faces
of these thoroughbred mental cases,
twice my age and half my weight.
We are all old-timers,
each of us holds a locked razor. 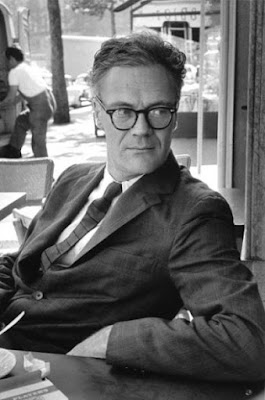 Posted by Anonymous at 8:06 PM