The Day I Saw Barack Obama Reading Derek Walcott’s Collected Poems
Was he looking for St. Lucia’s light
to touch his face those first days
in the official November snow & sleet
falling on the granite pose of Lincoln?
If he were searching for property lines
drawn in the blood, or for a hint
of resolve crisscrossing a border,
maybe he’d find clues in the taste of breadfruit.
I could see him stopped there squinting
in crooked light, the haze of Wall Street
touching clouds of double consciousness,
an eye etched into a sign borrowed from Egypt.
If he’s looking for tips on basketball,
how to rise up & guard the hoop,
he may glean a few theories about war
but they aren’t in The Star-Apple Kingdom.
If he wants to finally master himself,
searching for clues to govern seagulls
in salty air, he’ll find henchmen busy with locks
& chains in a ghost schooner’s nocturnal calm.
He’s reading someone who won’t speak
of milk & honey, but of looking ahead
beyond pillars of salt raised in a dream
where fat bulbs split open the earth.
The spine of the manifest was broken,
leaking deeds, songs & testaments.
Justice stood in the shoes of mercy,
& doubt was bandaged up & put to bed.
Now, he looks as if he wants to eat words,
their sweet, intoxicating flavor. Banana leaf
& animal, being & nonbeing. In fact,
craving wisdom, he bites into memory.
The President of the United States of America
thumbs the pages slowly, moving from reverie to reverie,
learning why one envies the octopus for its ink,
how a man’s skin becomes the final page. 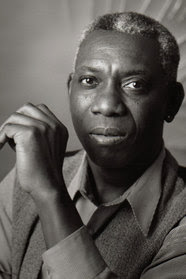 Posted by Anonymous at 8:23 AM