The Thunder Shower by Derek Mahon

A blink of lightning, then
a rumor, a grumble of white rain
growing in volume, rustling over the ground,
drenching the gravel in a wash of sound.
Drops tap like timpani or shine
like quavers on a line.

It rings on exposed tin,
a suite for water, wind and bin,
plinky Poulenc or strongly groaning Brahms’
rain-strings, a whole string section that describes
the very shapes of thought in warm
self-referential vibes

and spreading ripples. Soon
the whispering roar is a recital.
Jostling rain-crowds, clamorous and vital,
struggle in runnels through the afternoon.
The rhythm becomes a regular beat;
steam rises, body heat—

and now there’s city noise,
bits of recorded pop and rock,
the drums, the strident electronic shock,
a vast polyphony, the dense refrain
of wailing siren, truck and train
and incoherent cries.

All human life is there
in the unconfined, continuous crash
whose slow, diffused implosions gather up
car radios and alarms, the honk and beep,
and tiny voices in a crèche
piercing the muggy air.

Squalor and decadence,
the rackety global-franchise rush,
oil wars and water wars, the diatonic
crescendo of a cascading world economy
are audible in the hectic thrash
of this luxurious cadence.

The voice of Baal explodes,
raging and rumbling round the clouds,
frantic to crush the self-sufficient spaces
and re-impose his failed hegemony
in Canaan before moving on
to other simpler places.

At length the twining chords
run thin, a watery sun shines out,
the deluge slowly ceases, the guttural chant
subsides; a thrush sings, and discordant thirds
diminish like an exhausted concert
on the subdominant.

The angry downpour swarms
growling to far-flung fields and farms.
The drains are still alive with trickling water,
a few last drops drip from a broken gutter;
but the storm that created so much fuss
has lost interest in us. 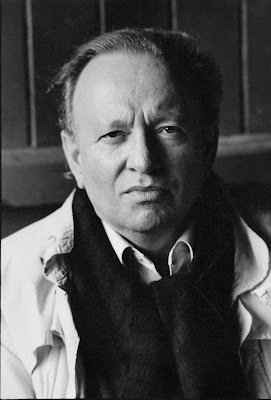