In Defense of “Candelabra with Heads” by Nicole Sealey

In Defense of “Candelabra with Heads”

If you’ve read the “Candelabra with Heads”
that appears in this collection and the one
in The Animal, thank you. The original,
the one included here, is an example, I’m told,
of a poem that can speak for itself, but loses
faith in its ability to do so by ending with a thesis
question. Yeats said a poem should click shut
like a well-made box. I don’t disagree.
I ask, “Who can see this and not see lynchings?”
not because I don’t trust you, dear reader,
or my own abilities. I ask because the imagination
would have us believe, much like faith, faith
the original “Candelabra” lacks, in things unseen.
You should know that human limbs burn
like branches and branches like human limbs.
Only after man began hanging man from trees
then setting him on fire, which would jump
from limb to branch like a bastard species
of bird, did we come to know such things.
A hundred years from now, October 9, 2116,
8:18 p.m., when all but the lucky are good
and dead, may someone happen upon the question
in question. May that lucky someone be black
and so far removed from the verb lynch that she be
dumbfounded by its meaning. May she then
call up Hirschhorn’s Candelabra with Heads.
May her imagination, not her memory, run wild. 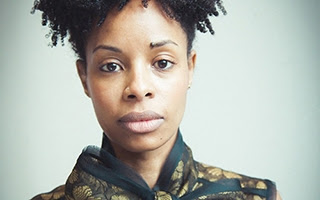