The Spire by Ellen Bryant Voigt

In the Bavarian steeple, on the hour,
two figures emerge from their scalloped house
carrying sledges that they clap, in turn,
against the surface of the bell. By legend
they are summer and winter, youth and age,
as though the forces of plenty and of loss
played equally on the human soul, extracted
easily the same low bronze note spreading
upward from the encumbrance of the village,
past alluvial fields to the pocked highland
where cattle shift their massive heads
at this dissonance, this faint redundant
pressure in the ears, in the air.
From the village, the mountain seems
a single stone, a single blank completion.
Seeing the summit pierce the abstract heavens,
we reconstruct the valley on the mountain—
a shepherd propped against his crook, birds
enthralled on a branch, the branch feathering
the edge of the canvas—transposing
such forms as can extend the flawed earth
and embody us, intact, unaltering, among
the soft surprising trees of childhood,
mimosa, honey locust and willow.
Wood in the midst of woods, the village
houses are allied in a formal shape
beside a stream, the streets concluding
at the monument. Again the ravishing moment
of the bell: the townspeople, curious
or accustomed, stop to count the strokes,
odd or even—the confectioner counting out
the lavender candies for his customer,
the butcher, the greengrocer, the surgeon
and the constable—as the housewife
stands on the stoop, shaking her mop,
and sees the dust briefly veil the air,
an algebra of swirling particles. 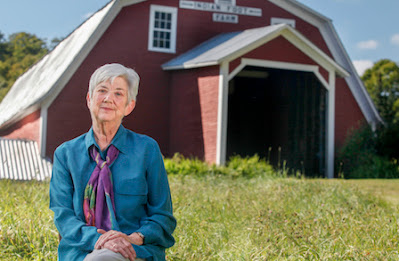