1.
After the accident, when summer brings
slow afternoons with nothing left to do,
I take what used to be your garden chair
and park it underneath the wayward ash
that sidles forward where the garden swerves
and hides the house from view. In secret then
I conjure up the notebook I have found
among your bedside things and open it.

Blank pages. Thoughts you never had, or had
but could not bring yourself to say. Should I
imagine them or write my own instead?
I close my eyes and scrutinize the white
that also lies inside me while the ash
rattles its pale-green keys above my head.

2.
The milk float with its thin mosquito whine
straining through larch and elder from the lane,
the nervous bottles in their metal basket
intent on music but without a tune,
the milkman in his doctor’s stubby coat
and sailor’s rakish dark-blue canvas cap

are all invisible, imagined/dreamed
beyond my curtains in the early light,
along with tissue footprints in the frost,
our rinsed-out empties, and the rolled-up note
exchanged for bottles with their silver tops
the blue tits have already broken through
to sip the stiffened plugs of cream before
we come downstairs and bring our order in.

3.
To think the world is endless, prodigal,
to part the hedgerow leaves and see the eggs
like planets in a crowded galaxy,
to hear my mother’s voice advising me
the mother bird herself will never mind
if I take only one and leave the rest,
means nothing more than showing interest.
As does the careful slow walk home, the ritual
of pinpricks through both ends, the steady breath
that blows the yolk and albumen clean out
but keeps the pretty shell intact, the nest
of crumpled paper in the cedar drawer,
the darkness falling then, the hush, and me
bringing the weight of my warm mind to bear.

4.
Beyond the grazing and the bramble bank
where on another day I might lie down
and press my ear against the trampled earth
to hear the rabbits scuffling underground,
a headland round the Ashgrove leads me on
past wheat fields which still show the buffeting
of last night’s storm, toward the Blackwater.

The stream has long since burst inside my head,
the banks collapsed, the water meadows drowned,
the mesh of overhanging branches bowed
with plastic voodoo junk and hanks of wool.
Then I arrive and see things as they are:
a settled surface with a clearing sky,
and shining gravel drifting inside clouds.

5.
My father with no explanation stays
behind at home; my mother drives away
and takes me with her to the Suffolk coast
where I lie down all day on rounded stones
and will the sun to thaw my frozen brain
while she . . . I’ve no idea what she does,
until the evening she manhandles me
to stand beside her in the chestnut shade
which makes a double darkness on the lawn
and watch the round moon roll into our sky
as Neil Armstrong takes his one small step
and pokes his flag into the silver dust
although we cannot see him, nor he us
except in ways I think my father might.

6.
Before our time they used my room to store
apples collected from those crooked trees
now wading waist deep at the garden end
in frilly white-capped waves of cow parsley,
and laid them out in rows not touching quite.
I know all this because the floorboards show
wherever they had missed one as it turned
to mush and left a round stain on the wood.

My bed stands over them and when at night
my eyes grow used to darkness they appear:
the Coxes, Bramleys, Blenheim Oranges
whose names alone can fill the empty air
with branches weighted down by next year’s crop
and turn its scent half bitter and half sweet.

7.
That lead tank like a coffin with no lid
lying between the cooler greenhouse room
my mother uses for her cuttings trays,
and one as steamy as the rain forest
with air so thickened by tomato plants
it lies like moist green velvet on my tongue—
that lead tank, that disgusting (almost)
store of syrupy black water is where Kit
my brother slipped, or threw himself to see
if that would make our father like him more,
and where, as I look down to see myself
alive and sensible, I envy him
his moment in a time outside our time,
free from the earth and all its appetites.

8.
The low tent-tunnel of the laurel walk
where no one but a child can stand today,
encloses me but keeps the world in view
in sudden supple leaps and starts of light.
Here out of sight I wait to meet myself
with no idea of what myself might be.
I drink the musty air and bide my time.
I shake the sullen shadows from my head.
I feel the deep earth rising in my bones.
I make believe the shivering small flies
beside me on the leaves, the sparrow gang
that flusters in its shallow bowl of dust
suppose that I want nothing more from them
except to stay here and not mean a thing.

9.
I try my father’s waders on for size
then take, with him encouraging, his rod
and wading stick, his canvas bag, his cap
rigid beneath its crown of favorite flies,
and step into the river. From the bank
he says I look like him. As for myself
I only think of how to stand upright
with water hardening one second round
my ankles, and the next uprooting me
as though I have no purchase on the world.
My father shouts, Don’t fight it. I obey.
I let the deluge settle round my heart
then lay me on my back and carry me
round the long sweep beyond my father’s sight.

10.
Those roofless kennels where the nettles shake
their fine-haired leaves and tiny bright-green buds.
That almost buried path of blood-red bricks
confined both sides by tiles shaped like rope.
The ruined square of cracked disrupted blocks
where once a summerhouse had turned and stared.
These are the former glories of the house
although I like their fall and brokenness
much more than grieving for a time I missed.
As also I like walking with the ghosts
that wander through the garden everywhere—
the mother and her son whose footsteps leave
no prints beside us in the grass as though
our selves are all the company we keep. 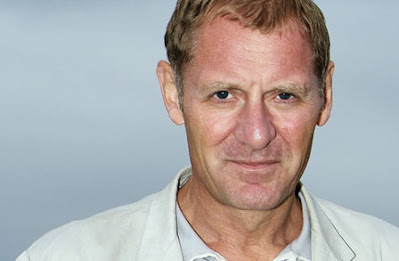 Posted by Anonymous at 9:28 PM