After days of darkness I didn't understand
a second of yellow sunlight
here and gone through a hole in clouds
as quickly as a flashbulb, an immense
memory of a moment of grace withdrawn.
It is said that we are here but seconds in cosmic
time, twelve and a half billion years,
but who is saying this and why?
In the Salt Lake City airport eight out of ten
were fiddling relentlessly with cell phones.
The world is too grand to reshape with babble.
Outside the hot sun beat down on clumsy metal
birds and an actual ten-million-year-old
crow flew by squawking in bemusement.
We're doubtless as old as our mothers, thousands
of generations waiting for the sunlight. 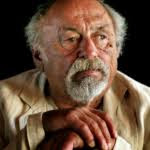 Posted by Anonymous at 8:20 PM