There is a difference it used to make,
seeing three swans in this versus four in that
quadrant of sky. I am not imagining. It was very large, as its
effects were. Declarations of war, the timing fixed upon for a sea-
departure; or,
about love, a sudden decision not to, to pretend instead to a kind
of choice. It was dramatic, as it should be. Without drama,
what is ritual? I look for omens everywhere, because they are everywhere
to be found. They come to me like strays, like the damaged,
something that could know better, and should, therefore—but does not:
a form of faith, you've said. I call it sacrifice—an instinct for it, or a habit
at first, that
becomes required, the way art can become, eventually, all we have
of what was true. You shouldn't look at me like that. Like one of those
saints
on whom the birds once settled freely 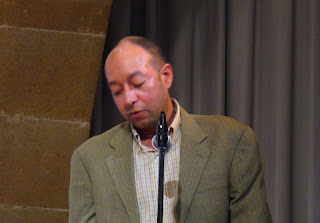