Saturday, Sunday, Monday, Tuesday
Saturday morning
two hawks flew over the soccer field and swooped in low
as Abram almost scored a goal. Moses, on the sideline, sat
on a stray ball reading a book, not looking up at the game
or the hawks or his brother who noticed. That night
at the Basic Trust Day Care Poker Tournament I got knocked
out with queen/nine against queen/jack by Dan Shiffman
who seemed almost sad to beat me. I sucked on ginger candies
and held new baby Phoebe Kate, born on the same due date
as the baby I miscarried. When she left I cried and had more candies.
In the end, Josh beat everyone and won a 40-inch flat-screen TV.
Sunday morning
I couldn’t sleep so got up early, went to the Hell’s Kitchen
flea market and bought a dining table and chairs from a man
named Toney. Bargained him down to $690 (including delivery)
because “the chairs need new upholstery.” A 1950ish Danish
with expandable top and funny splayed feet—it reminds me
of my late Grandma Lotty, her sister Marguerite, and the heavy-laden
tables of childhood. I’ve no idea what it will look like
with my small family gathered round or if I’ll overworry
the polished surface. We’ll see—
it arrives on Tuesday.
This morning
I got a stack of papers from sophomore lit. The top two
had the author’s name misspelled. I’ve not yet looked at
any others. I talked in class about how Art Spiegelman
chose realism over sentiment, how we conflate historical time
with personal time, how on 9/11 I took my nine-month old son
to his first day of day care and the city expoloded, went up
in smoke, and no one but me cares that he spent hours there,
only nine months old, while we watched TV in our phone-jammed
airspace, breathed in fumes, tried to give blood, wondered was there
anywhere, anywhere we could or should
flee to?—
Josh called right after class and said he’d gotten “strong intent” from an agent
who’s “all about the money.”
Nothing disastrous happened this week. Not so far. Unless you count
what I saw next, between classes on my way to read student poems
at Empanada Mama’s on 48th and 9th. A teenage boy lying on his side
in the middle of the street. The traffic stopped and a crowd watched
while six or seven other boys ran back and forth and stamped down
hard on his skull. I turn a gag into a kind of cough and dial 911
We’ve already called the fucking police, says a woman as I retch
into an empty trash can. Finally three teenage girls surround the boy
and the other boys move off.
Later,
on my way back to Fordham, I stop a cop and ask
about the boy. EMTs got him, says the officer.
They had no shame, no fear, even with all of us watching . . . I tell him.
They’re kids, ma’am, he says. You know what kids is like.
Tonight
in Writer’s Workshop I & II I read two cantos from Model Homes
by Wayne Koestenbaum and then “A Poet’s Life” by David Trinidad.
These poems hijack form and make it present, contemporary, immediate. Look how
Wayne puts a plumber and lovers, his mother, porn mags, fashion into terza rima
that lead us along, punch drunk, addicted to real life. And oh how David’s crown
of sonnets breaks our hearts! The students stare blankly; one:
These are sonnets?
and someone’s cell phone rings with the sound of a human voice pleading:
Pick up! Pick up! Pick up!
After an hour
we head upstairs to hear Linda Gregg, Saskia Hamilton, and Tess Gallagher.
Linda says, I had a husband once named John and we did mushrooms
and John said, “We’re lost but hey don’t worry because when it gets dark I can read
the stars” and I said “I don't know what you’re talking about. We’re not lost.
We’re right here.” And my students, aghast at who knows what,
start passing notes and rustling papers. Tess talks about her cancer
and the ghosts within and Saskia reads poems thick with grief,
some in a cracked guttural tongue I think is Danish.
When I get home
and try to describe the boy in the street Josh says, More people died
in Iraq this month than any other and I remind him that tomorrow morning,
before the new table is due to be delivered, we’re going to Saint Vincent’s
Hospital where Dr. Margano will put the KY-covered wand inside me
and tell us if these past nine weeks have yielded a fetal heartbeat
which will change everything, nothing. 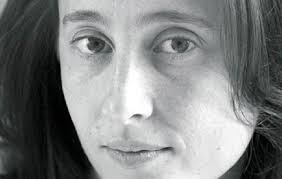