The Iraqi Nights by Dunya Mikhail

1.
In the first year of war
they played “bride and groom”
and counted everything on their fingers:
their faces reflected in the river;
the waves that swept away their faces
before disappearing;
and the names of newborns.
Then the war grew up
and invented a new game for them:
the winner is the one
who returns from the journey
alone,
full of stories of the dead
as the passing wings flutter
over the broken trees;
and now the winner must tow the hills of dust
so lightly that no one feels it;
and now the winner wears a necklace
with half a metal heart for a pendant,
and the task to follow
is to forget the other half.
The war grew old
and left the old letters,
the calendars and newspapers,
to turn yellow
with the news,
with the numbers,
and with the names
of the players.

2.
Five centuries have passed
since Scheherazade told her tale.
Baghdad fell,
and they forced me to the underworld.
I watch the shadows
as they pass behind the wall:
none look like Tammuz.
He would cross thousands of miles
for the sake of a single cup of tea
poured by my own hand.
I fear the tea is growing cold:
cold tea is worse than death.

3.
I would not have found this cracked jar
if it weren’t for my loneliness,
which sees gold in all that glitters.
Inside the jar is the magic plant
that Gilgamesh never stopped looking for.
I’ll show it to Tammuz when he comes,
and we’ll journey, as fast as light,
to all the continents of the world,
and all who smell it will be cured
or freed,
or will know its secret.
I don’t want Tammuz to come too late
to hear my urgent song.

4.
When Tammuz comes
I’ll also give him all the lists I made
to pass the time:
lists of food,
of books,
lost friends,
favorite songs,
list of cities to see before one dies,
and lists of ordinary things
with notes to prove
that we are still alive.

5.
It’s as if I’m hearing music in the boat’s hull,
as if I can smell the river, the lily, the fish,
as if I’m touching the skies that fall from the words “I love you,”
as if I can see those tiny notes that are read over and over again,
as if I’m living the lives of birds who bear nothing but their feathers.

6.
The earth circled the sun
once more
and not a cloud
nor wind
nor country
passed through my eyes.
My shadow,
imprisoned in Aladdin’s lamp,
mirrors the following:
a picture of the world with you inside,
light passing through a needle’s eye,
scrawlings akin to cuneiform,
hidden paths to the sun,
dried clay,
tranquil Ottoman pottery,
and a huge pomegranate, its seeds
scattered all over Uruk.

7.
In Iraq,
after a thousand and one nights,
someone will talk to someone else.
Markets will open
for regular customers.
Small feet will tickle
the giant feet of the Tigris.
Gulls will spread their wings
and no one will fire at them.
Women will walk the streets
without looking back in fear.
Men will give their real names
without putting their lives at risk.
Children will go to school
and come home again.
Chickens in the villages
won't peck at human flesh
on the grass.
Disputes will take place
without any explosives.
A cloud will pass over cars
heading to work as usual.
A hand will wave
to someone leaving
or returning.
The sunrise will be the same
for those who wake
and those never will.
And every moment
something ordinary
will happen
under the sun. 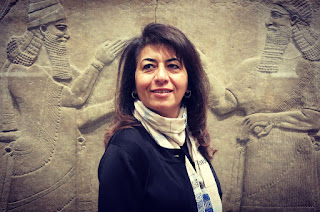