What We Know of Horses by Reginald Dwayne Betts

What We Know of Horses

& when my brother says Swann Rd.
is the world, he ignores boarded
vacants, broken windows—this place’s
shattered glass? He tells me
“believe the world is tenement house,
a pocket full of stones, a world
of ghosts, & what’s left of ash &
smoke after each inhale.” I visit now
that a prison cell holds his world.
Dead men circle every block
we know, thread this world
with quotes from psalms, “the sorrows
of death embrace me,” “some trust
in chariots and some in horses.”
They embrace metaphor, disbelieve
gravity, breathe in a haunted world.
& what of my brother? Running
these streets, he was a horse—
graceful, destined to be
broken. Why admire horses?

Why compare everything fast
& beautiful to horses?
My daddy’s generation had a saying
for men lost in the world,
it was true of my uncle, my cousin—
men strung out on horse,
chasing the dragon, shivering
with the memory of that stallion
gone postal in their veins—
called them lost in place,
with cities buried inside them—horses
inside them stampeding.
My brother put his faith in horse,
& there is no map to find him now.
He tells me he inhales
the funk of men doing life
& knows he is in hell,
that he has dug his grave
amongst bricks that embrace him.
He—exile, with only rusted iron
& bricks bracing his two hundred pounds.

Who admits this cage embraces
him? “History is written
on the back of the horse” broken
by the world. We all in prison now.
I stare at this man, my kin
ruined by embracing
night. Call this place a horse collar,
& watch how it cuts into skin,
how the leather embraces
all of our necks. Even as a visitor
behind plate glass I brace
myself for cuffs. This not Swann
Rd., this burden placed on me,
these memories of courtrooms
and the places where bodies were found.
& still, I want to stop and embrace
my brother, to hold him close
& pause to inhale the scent of prison,
to tell him what I smell, what I inhale,
is still the body of a man.

How can a man inhale
so much violence and not change?
I light my Newport, inhale.
Think on how his voice has changed.
My man, now a feral horse
wearing kick chains: unable to sleep,
always on guard, inhaling
the air for prey, as if he is still
the predator, as if he can inhale
death & keep on living. Death
the elephant in this world.
I imagine the other men here, all
in a world filled with a casket’s aftermath.
How much grief can you inhale?
My brother tells me he prays
at night, he wants to leave this place.
But we know all his wild hours placed
him in this mural of blood.
His hunger placed him in C-block,
Cell 21. It suffocates
& nothing replaces time.

“You okay in here,” I ask.
But he’s in a place
only he knows. When he walks
away he embraces
the kind of rage I fear. A man
was killed near him, placed
on a gurney and rushed
down a sidewalk. Dead
in a place where no one gives
a fuck if you’re breathing.
To be a horse galloping away
is what I want for him,
he wants horse trundling through
his scarred veins. Prison
has taken the place of
freedom, even in his dreams.

& I know, this is not a “world
where none is lonely.” & I know,
he is lost to the world,
& I know he believes this:
“I shut my eyes and all the world
is dead,” & I know that there is
still a strip, a place
that he believes is the world:
Swann Rd., where he can inhale
& be free. Sometimes his cuffs
are on my wrists & I embrace
the way they cut, as if I am the one
domesticated, a broken horse. 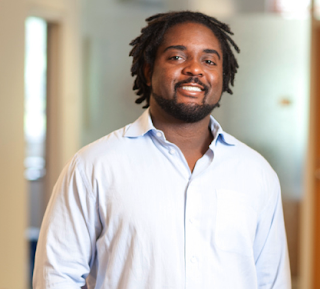