:    somewhere I did not learn mow down or mop up

:    somewhere I wouldn’t hear your father must come with
me or I must fingerprint your grandmother can you
translate please

:    the FBI has my cousins’ computers

:    my father says say whatever you want over the phone

:    my father says don’t let them scare you that’s what they want

:    my mother has a hard time believing anything’s bugged

:    my father and I always talk like the world listens

:    my father is still on the bus with contraband papers
under his seat as uniforms storm down the aisle

:    it was my job to put a cross on each home with dead for
clearing

:    it was my job to dig graves into the soccer field

:    I wrote Shahida headless found beside Saad Mosque
buried in the same grave as the above

:    I wrote their epitaphs in chalk

:    from my son’s wedding mattress I know this mound’s
his room

:    I dropped a knee and engaged the enemy

:    I emptied my clip then finished the job

:    I took two steps in and threw a grenade

:    I took no more than two steps into a room before firing

:    in Haditha we cleared homes Fallujah-style

:    my father was reading the Koran when they shot him
through the chest

:    they fired into the closet

:    Here lie the mortal remains of one who in life searched
your face

:    let’s miss an appointment together

:    that Haditha bed with magenta queen sheets and
wood-shelved headboard and blood splattered up the
walls to the ceiling

:    they slept on opposing ends wishing one would leave

:    mother doesn’t know who I am anymore

:    I write Here lies an unknown martyr a big security guard
with a blue shirt found near an industrial area with a
chain of keys

:    they ask if I have anything to declare then limit my
response to fruits and nuts

:    an American interrupts an A and B conversation to tell
me you don’t have to do anything you don’t want to do

:    he strikes me as a misstep away from she was asking for it

:    what did you expect after fishing Popov from a trash bin

:    what did you expect after accepting a marbled palace

:    they drag the man who killed my uncle out a hole

:    they inspect him for ticks on national television

:    no one in my family celebrates

:    when the FBI knocks I tell them I don’t have to do
anything I don’t want to do and they get a kick out
of that

:    she just laid there and took it like a champ

:    at a protest a man sells a shirt that reads My dick would
pull out of Iraq

:    my mother tape-records my laugh to mail bubblewrapped
back home

:    I am singing the moon will come one night and take me
away side street by side street

:    sitting on a pilled suburban carpet or picking blue felt
off the hand-me-down couch

:    how much I can wear away with no one watching

:    two generations ago my blood moved through borders
according to grazing seasons

:    then a lifeline of planes

:    planes fly so close to my head filled with bomblets and
disappeared men

:    I burn my finger on the broiler and smell trenches

:    my uncle pissing himself

:    shopping bags are legs there is half a head in the gutter

:    some tribunal may read it all back to me

:    Golsorkhi, I know the cell they will put me in

:    they put me onto a crooked pile of others to rot

:    is this what happens to a brain born into war

:    we have learned to sing a child calm in a bomb shelter 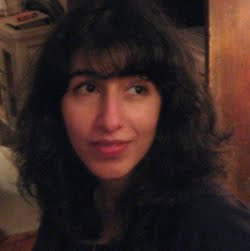