Celestial Music
I have a friend who still believes in heaven.
Not a stupid person, yet with all she knows, she literally talks to God.
She thinks someone listens in heaven.
On earth she's unusually competent.
Brave too, able to face unpleasantness.

We found a caterpillar dying in the dirt, greedy ants crawling over it.
I'm always moved by disaster, always eager to oppose vitality
But timid also, quick to shut my eyes.
Whereas my friend was able to watch, to let events play out
According to nature. For my sake she intervened
Brushing a few ants off the torn thing, and set it down
Across the road.
My friend says I shut my eyes to God, that nothing else explains
My aversion to reality. She says I'm like the child who
Buries her head in the pillow
So as not to see, the child who tells herself
That light causes sadness-
My friend is like the mother. Patient, urging me
To wake up an adult like herself, a courageous person-
In my dreams, my friend reproaches me. We're walking
On the same road, except it's winter now;
She's telling me that when you love the world you hear celestial music:
Look up, she says. When I look up, nothing.
Only clouds, snow, a white business in the trees
Like brides leaping to a great height-
Then I'm afraid for her; I see her
Caught in a net deliberately cast over the earth-
In reality, we sit by the side of the road, watching the sun set;
From time to time, the silence pierced by a birdcall.
It's this moment we're trying to explain, the fact
That we're at ease with death, with solitude.
My friend draws a circle in the dirt; inside, the caterpillar doesn't move.
She's always trying to make something whole, something beautiful, an image
Capable of life apart from her.
We're very quiet. It's peaceful sitting here, not speaking, The composition
Fixed, the road turning suddenly dark, the air
Going cool, here and there the rocks shining and glittering-
It's this stillness we both love.
The love of form is a love of endings. 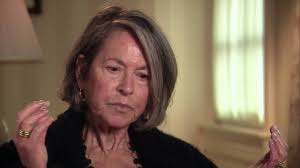