The Rowing Endeth by Anne Sexton

I’m mooring my rowboat
at the dock of the island called God.
This dock is made in the shape of a fish
and there are many boats moored
at  many different docks.
“It’s okay.” I say to myself,
with blisters that broke and healed
and broke and healed –
saving themselves over and over.
And salt sticking to my face and arms like
a glue-skin pocked with grains of tapioca.
I empty myself from my wooden boat
and onto the flesh of The Island.

“On with it!” He says and thus
we squat on the rocks by the sea
and play – can it be true –
a game of poker.
He calls me.
I win because I hold a royal straight flush.
He wins because He holds five aces,
A wild card had been announced
but I had not heard it
being in such a state of awe
when He took out the cards and dealt.
As he plunks down His five aces
and I am still grinning at my royal flush,
He starts to laugh,
and laughter rolling like a hoop out of His mouth
and into mine,
and such laughter that He doubles right over me
laughing a Rejoice-Chorus at our two triumphs.
Then I laugh, the fishy dock laughs
the sea laughs. The Island laughs.
The Absurd laughs.

Dearest dealer,
I with my royal straight flush,
love you so for your wild card,
that untamable, eternal, gut-driven ha-ha
and lucky love. 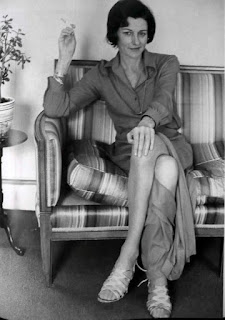