The Clearing by Tomas Tranströmer

Deep in the forest there’s an unexpected clearing that can be reached only by someone who has lost his way.
The clearing is enclosed in a forest that is choking itself. Black trunks with the ashy beard stubble of lichen. The trees are tangled tightly together and are dead right up to the tops, where a few solitary green twigs touch the light. Beneath them: shadow brooding on shadow, and the swamp growing.
But in the open space the grass is unexpectedly green and alive. There are big stones lying here as if they’d been arranged. They must be the foundation stones of a house, but I could be wrong. Who lived here? No one can tell us. The names exist somewhere in an archive that no one opens (only archives stay young). The oral tradition has died and with it the memories. The gypsy people remember but those who have learned to write forget. Write down, and forget.
The homestead murmurs with voices, it is the center of the world. But the inhabitants die or move out, the chronicle breaks off. Desolate for many years. And the homestead becomes a sphinx. At last everything’s gone, except the foundation stones.
Somehow I’ve been here before, but now I must go. I dive in among the thickets. I can push my way through only with one step forward and two to the side, like a chess knight. Bit by bit the forest thins and lightens. My steps get longer. A footpath creeps toward me. I am back in the communications network.
On the humming electricity pole a beetle is sitting in the sun. Beneath the shining wing covers its wings are folded up as ingeniously as a parachute packed by an expert. 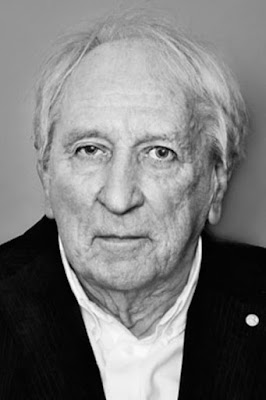 Posted by Anonymous at 8:32 PM