The Golden Shovel by Terrance Hayes

When I am so small Da’s sock covers my arm, we
cruise at twilight until we find the place the real

men lean, bloodshot and translucent with cool.
His smile is a gold-plated incantation as we

drift by women on bar stools, with nothing left
in them but approachlessness. This is a school

I do not know yet. But the cue sticks mean we
are rubbed by light, smooth as wood, the lurk

of smoke thinned to song. We won’t be out late.
Standing in the middle of the street last night we

watched the moonlit lawns and a neighbor strike
his son in the face. A shadow knocked straight.

Da promised to leave me everything: the shovel we
used to bury the dog, the words he loved to sing,

his rusted pistol, his squeaky Bible, his sin.
The boy’s sneakers were light on the road. We

watched him run to us looking wounded and thin.
He’d been caught lying or drinking his father’s gin.

He’d been defending his ma, trying to be a man. We
stood in the road, and my father talked about jazz,

how sometimes a tune is born of outrage. By June
the boy would be locked upstate. That night we

got down on our knees in my room. If I should die
before I wake, Da said to me, it will be too soon.

Into the tented city we go,
weakened by the fire’s ethereal

afterglow. Born lost and cooler
than heartache. What we

know is what we know. The left
hand severed and school-

ed by cleverness. A plate of
weekdays cooking. The hour lurk-

ing in the afterglow. A late-
night chant. Into the city we

go. Close your eyes and strike
a blow. Light can be straight-

ened by its shadow. What we
break is what we hold. A sing-

ular blue note. An outcry
singed exiting the throat. We

push until we thin,
thinking we won’t creep back again.

While God licks his kin, we
sing until our blood is jazz,

we swing from June to June.
We sweat to keep from we-

eping. Groomed on a diet
of hunger, we end too soon. 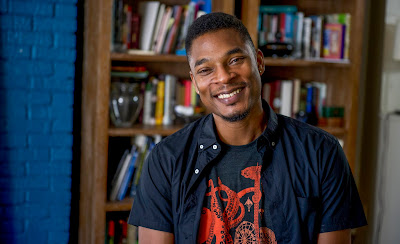