The View by Mark Strand

This is the place. The chairs are white. The table shines.
The person sitting there stares at the waxen glow.
The wind moves the air around, repeatedly,
As if to clear a space. ‘A space for me,’ he thinks.
He’s always been drawn to the weather of leavetaking,
Arranging itself so that grief – even the most intimate –
Might be read from a distance. A long shelf of cloud
Hangs above the open sea with the sun, the sun
Of no distinction, sinking behind it – a mild version
Of the story that is told just once if true, and always too late.
The waitress brings his drink, which he holds
Against the waning light, but just for a moment.
Its red reflection tints his shirt. Slowly the sky becomes darker,
The wind relents, the view sublimes. The violet sweep of it
Seems, in this effortless nightfall, more than a reason
For being there, for seeing it, seems itself a kind
Of happiness, as if that plain fact were enough and would last. 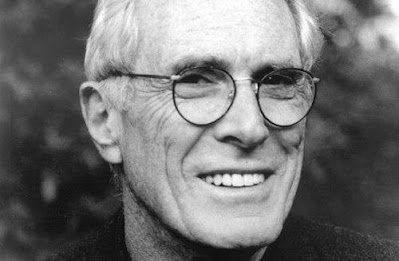 Posted by Anonymous at 5:47 PM