When My Brother Was An Aztec by Natalie Diaz

When My Brother Was An Aztec

he lived in our basement and sacrificed my parents
every morning. It was awful. Unforgivable. But they kept coming
back for more. They loved him, was all they could say.

It started with him stumbling along la Avenida de los Muertos,
my parents walking behind like effigies in a procession
he might burn to the ground at any moment. They didn't know

what else to do except be there to pick him up when he died.
They forgot who was dying, who was already dead. My brother
quit wearing shirts when a carnival of dirty-breasted women

made him their leader, following him up and down the stairs—
They were acrobats, moving, twitching like snakes—They fed him
crushed diamonds and fire. He gobbled the gifts. My parents

begged him to pluck their eyes out. He thought he was
Huitzilopchtli, a god, half-man, half-hummingbird. My parents
at his feet, wrecked honeysuckles, he lowered his sword-like mouth,

gorged on them, draining color until their eyebrows whitened.
My brother shattered and quartered them before his basement festivals—
waved their shaking hearts in his fists,

while flea-ridden dogs ran up and down the steps,
licking their asses,
turning tricks. Neighbors were amazed my parents' hearts kept
growing back—It said a lot about my parents, or parents' hearts.

My brother flung them into cenotes, dropped them from cliffs,
punched holes into their skulls like useless jars or vases,
broke them to pieces and fed them to gods ruling

the ratty crotches of street fair whores with pocked faces
spreading their thighs in flophouses with no electricity.
He slept in filthy clothes smelling of rotten peaches and matches,
fell in love

with sparkling spoonfuls the carnival dog-women fed him.
My parents lost their appetites for food, for sons.
Like all bad kings, my brother
wore a crown, a green baseball cap turned backwards

with a Mexican flag embroidered on it. When he wore it
in the front yard, which he treated like his personal zócalo,
all his realm knew he had the power that day, had all the jewels

a king could eat or smoke or shoot. The slave girls came
to the fence and ate out of his hands. He fed them maíz
through the chain links. My parents watched from the window,

crying over their house turned zoo, their son who was
now a rusted cage. The Aztec held court in a salt cedar grove
across the street where peacocks lived. My parents crossed fingers

so he'd never come back, lit novena candles
so he would. He always came home with turquoise and jade
feathers and stinking of peacock shit. My parents gathered

what he'd left of their bodies, trying to stand without legs,
trying to defend his blows with missing arms,
searching for their fingers to pray, to climb out of whatever
dark belly my brother, the Aztec,
their son, had fed them to. 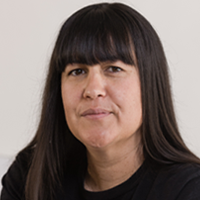